Can cryptocurrency disrupt the world economy

Since the 1990s, they have been several attempts to create a cryptocurrency. However, these previous attempts were not successful, until the arrival of bitcoin. In 2008, a paper was published called, “A Peer-to-Peer Electronic Cash System” and the domain name, “bitcoin.org” was registered. This was the genesis of bitcoin.

Since then bitcoins has not only taken off, but it has grown into a success. 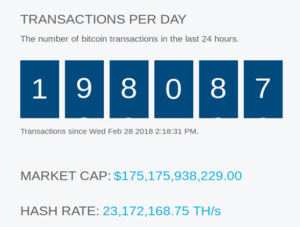 As of today, there are over a hundred thousand bitcoin transactions per day and one bitcoin is equivalent to USD $10,614.74.

Furthermore, the growth of bitcoin has also seen the rise in other cryptocurrencies such as Ethereum, Litecoin and Dash.

The blockchain technology, which is use for bitcoin transactions, is developing into a disruptive technology that can be apply to a number of industries. Furthermore, there are frequent attempts to create more cryptocurrency.

Before delving into whether cryptocurrency can disrupt the world economy, it’s crucial to understand what makes it unique. Part of that answers lies in the technology, and the other half lies in simply the massive growth cryptocurrency has experienced in such a short span of time.

The essence of blockchain technology is that it is simply a ledger or a record of transactions that cannot be tampered by any third party. For example:

A “transaction” is simply a piece of information and can be applied to cryptocurrency, contracts, records and more.

Since its genesis, bitcoin has grown rapidly and beyond the experts’ expectations.

Here’s a look at the value growth of bitcoin. 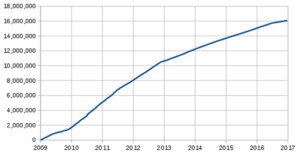 Here’s a look at the volume of transactions of bitcoins over the years. 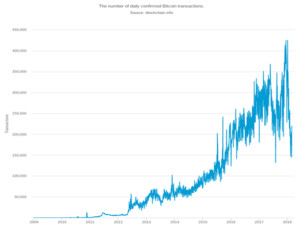 And, here’s a look at the volume of bitcoins in circulation. 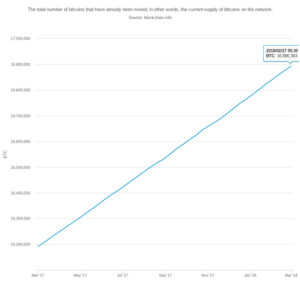 These are massive growth figures and the reason for such rapid growth is due to the profit it offers.

Cryptocurrency is not backed by a government or bank. Rather, it is subject to the forces of the market. Hence, this ties in strongly with blockchain technology.

Could it Challenge the Dollar Standard?

The US currency is the leading currency in the world. The world economy is dependent on the stability of the US Dollar. In the next few years, there is a very real possibility that bitcoin could become a dominating financial-force. In fact, the decentralized nature of cryptocurrency ensures that it is has a free-reign of growth. Furthermore, there have been discussions by governments to create their own cryptocurrency. In case, a country like Russia, with a number of economic sanctions imposed on it, initiates its own cryptocurrency, it could provide an escape route through those economic sanctions.

Is it cutting out the Financial Authorities?

The financial ecosystem is occupied by various financial authorities such as national and international banks, and SWIFT. SWIFT is essentially a network that transmits information between financial institutions. It stands for Society for Worldwide Interbank Financial Telecommunication and without it international money transfers cannot occur.

Cryptocurrency follows a different transport protocol that is not controlling by any entity. This is making it difficult to track and trace transactions. Christine Lagarde, the head of the International Monetary Fund (IMF) said in 2017, “I think that we are about to see massive disruptions”, in response to a query on cryptocurrency.

Can it Crowdfund Businesses?

There has seen a rise in a number of startup businesses. Here’s a look at how ICOs have grown over the years.

A company named Tezos managed to rise over $230 million through ICOs.

According to a report by CNN, ICOs managed to raise $1.2 billion in the last year and surpassed the funding offered by early-stage venture capitalists.

Can it support illegal activities?

Monetary Authority of Singapore has stated that ICOs are “vulnerable to money laundering and terrorist financing risks due to the anonymous nature of the transactions, and the ease with which large sums of monies may be raise in a short period of time.”

The reality is that cryptocurrency can enable illegal activities. The best example is Silk Road. Silk Road was an illegal, online marketplace wherein transactions occurred using cryptocurrency. The US Justice Department claimed to recover bitcoin’s valued at $48 million through their Silk Road investigation.

Cryptocurrency can not only support illegal activities, but it also offers a great level of anonymity that encourages blackmarket transaction.

However, it is only a matter of time. Many businesses are already operating with cryptocurrencies and several governments are planning to create their own cryptocurrency.